This type of seal was fitted to a hot oil vertical pump removing oil residues from a tar pool. It was recommended as a viable permanent alternative to packing.

First problem, it was a vertical pump, the seal was fitted in place of the packing but there was no stuffing box vent.

Second problem, it was a pump handling hot oil which formed a tar substance when cool, leaked oil hardened around the seal.

Third problem, the pump had sleeve bearings, fine with a packed gland, which probably added to the stability of the shaft, but not so good for this type of seal.

Fourth problem, the natural leak paths through the seal meant that the seal could never be truly stabilized and made reliable. The proper recommendation for this pump was to use a double cartridge seal with a vent and circulating steam trace or, if not viable, carbon fibre packing.

The pump leaked badly after short service and caught fire. I remain amazed that anyone could recommend such an application as a permanent repair. 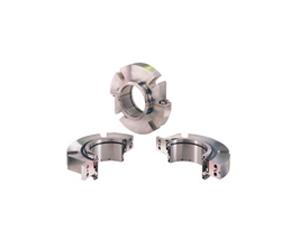